The canoe team for protecting Oura Bay, Henoko, Okinawa, from construction of a new U.S. military base

NAGO, Okinawa — The Conference Opposing Heliport Construction will hold a major seaborne event to protect lives in Henoko/Oura Bay on Saturday, Feb. 16, from 9 a.m. to 12 p.m. The action comes in response to the national government’s continued dumping of sand and soil into the waters of Henoko/Oura Bay in Nago since Dec. 14 last year, despite requests from the Okinawa Prefectural Government to stop all construction related to the building of a new U.S. military base here.

The methods used by the state to carry out the dumping of soil and sand cannot be described as those of a nation governed by the rule of law. They include the use of a dock owned by a private company to load and ship out soil and sand to be used for land reclamation, which is not the dock’s intended purpose; the use of the K9 seawall as a dock to unload said soil and sand, which is not the seawall’s intended purpose, and without the permission of the prefectural government; and the dumping of red soil—which differs from the type of soil and sand that the national government had stated it would use in its plans for land reclamation—into the ocean. 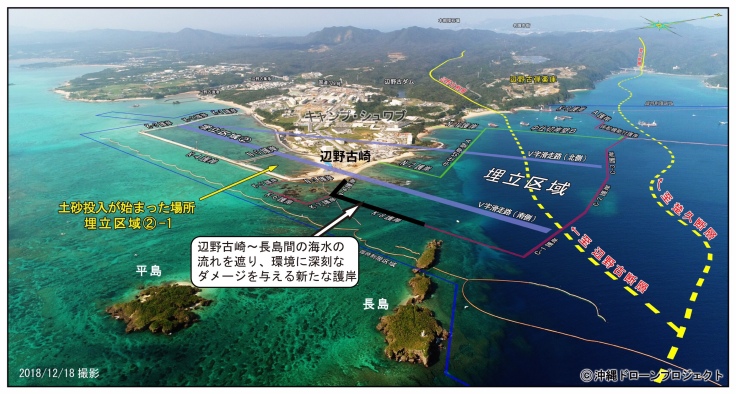 Furthermore, on Jan. 28, the national government newly began work to build the N4 seawall and the K8 seawall connecting to it. This move hints at the government’s hope to complete and use the seawalls as another dock for unloading soil and sand in order to accelerate land reclamation work.

Once the K8 seawall is completed, the flow of water between Cape Henoko and Nagashima island will be blocked. This will not only wreak deadly damage on the natural environment and living creatures near the seawall, but heavily impact the whole of Oura Bay.

The government has not resolved the issue of a seafloor described to be “as soft as mayonnaise,” which has the potential to completely derail the very plans for building a military base at the site in question. Environmental destruction under such circumstances, which displays flagrant disrespect toward life, must not be tolerated.

As we say in Okinawan, “nuchi du takara” (all life is a treasure). To leave the ocean for future generations, we call on our friends and allies across the world to take action to protect life.

We would like the people of Okinawa to see this as an opportunity to witness with their own eyes the tyrannical actions of the Japanese government unfolding in the beautiful ocean, ahead of the Okinawa prefectural referendum.

The “2.16 Major Seaborne Action to Protect Life in Henoko/Oura Bay” will take place on Saturday, Feb. 16, from 9 a.m. to 12 p.m. Those who would like to cover the event by riding on one of our boats must register by Thursday, Feb. 14.

To register, or for inquiries, email: henokoblue@outlook.jp.